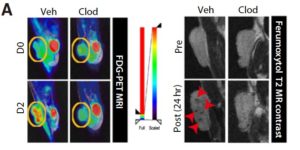 Tumor hypoxia and aerobic glycolysis are well-known resistance factors for anticancer therapies. Most tumour cells are subject to conditions in which oxygen is not readily available, known as tumour hypoxia, due to abnormal vasculature. Effective radiotherapy relies on the creation of reactive oxygen species, therefore hypoxic tumors are radiation resistant. Further, both chemotherapy and immunotherapy have been shown to be less effective when exposed to hypoxic environments. Hypoxia also promotes aerobic glycolysis, a metabolic state in which tumours preferentially utilize glucose over oxygen as an energy substrate. In this metabolic state, treatment efficacy is again  reduced, and tumour recurrence is promoted. Because of the recognition of hypoxia as an important barrier to cancer treatment, much research has focused on how to overcome or reverse tumor hypoxia.

Tumor-associated macrophages (TAMs) are immune cells recruited to tumors and have been extensively reported for their role in promoting tumour growth and creating an immunosuppressed tumour microenvironment. While TAMs have been shown to produce various factors for tumor survival and inhibit antitumor immune responses, they also provide multiple targets of immunotherapies for limiting tumor progression. Thus, a thorough understanding of the mechanisms by which TAMs promote tumour cell growth provides valuable information which may be used for further novel tumour treatment techniques.