Transverse Aortic Constriction (TAC): Why, how and the outcome as it relates to pressure overload-induced cardiac hypertrophy and/or heart failure

Chronic congestive heart failure, more commonly referred to as heart failure (HF), is a multifactorial cardiac disease which can affect the heart both structurally and/or functionally thereby impairing its ability to properly fill and eject blood from the ventricles. It is one of the leading causes of death with increasing incidence and prevalence rates, partially due to our aging population as well as enhanced cardiovascular interventions.

Preliminary diagnosis of heart failure is achieved by considering patient history and performing a physical examination. The main symptoms presented during examination include dyspnea and fatigue, intolerance to exercise, and peripheral and/or pulmonary edema. Conclusive diagnosis in the clinical setting for heart failure patients is to run a 2-dimensional echocardiogram scan coupled with Doppler flow studies.

Treatment/interventions which have had some success with heart failure patients include cardiac resynchronization therapy and implantable cardioverter-defibrillators, angiotensin receptor blockers, beta-blockers, ACE inhibitors, hydralazine and nitrates, or aldosterone antagonists. In the most severe cases, patients have undergone cardiac transplant surgery if they were eligible.

With all the progress made in the field, researchers continue to investigate the underlying causes and mechanisms of heart failure and explore safer and more effective strategies to treat and manage the disease. Scientists have developed numerous research models that have become prevalent in cardiovascular research labs and this article will focus on one particular model that has significantly enhanced the ability for scientific discovery. The transverse aortic constriction model (or TAC banding model) results in left-sided heart failure through pressure overload partial occlusion of the transverse aorta. This procedure often leads to cardiac hypertrophy, a common compensatory mechanism in heart failure and, in some animals, will result in heart failure over time. Disease progression in this model, and ultimately the development of heart failure, depends on several factors as will be discussed below. Thus, having a means to non-invasively confirm surgical success, monitor progression, and confirm heart failure is key to ongoing research efforts to find new therapeutic targets.

One of the first reports of the application of a transverse aortic constriction (TAC) came from Howard Rockman’s lab at Duke University in his 1991 publication titled “Medical Sciences Segregation of Atrial-Specific and Inducible Expression of an Atrial Natriuretic Factor Transgene in an in Vivo Murine Model of Cardiac Hypertrophy”2. They constricted the transverse aorta in mice between the innominate artery and the left common carotid artery by tightening a nylon suture against a 27-gauge needle to yield an approximate 0.4 mm aortic diameter. Creating stenosis in the aortic arch resulted in the development of left ventricle cardiac hypertrophy in their research animals. The location of stenosis also caused blood flow/pressure to increase in the right carotid artery, whilst the left carotid artery blood flow was markedly reduced. The paper by Rockman et al. has been cited in over 200 other scientific publications reporting the usage of TAC to cause pressure overload cardiac hypertrophy.

The method employed by Rockman et al. was groundbreaking at the time, but had its flaws, specifically the invasive nature of the procedure3. Banding the aorta required opening the thoracic cavity and mechanically ventilating the lung. Ventilation results in compensatory physiological responses4 both at the whole-body level as well as down to the cellular level. These compensatory mechanisms can confound study results and can increase fatality during recovery. In an effort to improve surgical consistency, survival, and to remove the need for ventilation, a less invasive alternative was developed called the closest-chest model5,6 which has been used for several years. This technique has been purported to have lower fatality and improved post-surgery recovery rates. The constriction is applied by tightening a nylon suture around the aorta which does lead to some variability in aortic stenosis size as well as potential slipping of the suture (resulting in a looser banding of the aorta). Geir Christensen’s group came up with a solution by constricting the mouse ascending aorta using O-rings with fixed inner diameters7 as small as 0.61 mm.

Every effort should be made to standardize the surgical procedure to reduce variability in hypertrophy/heart failure. Several groups have provided specific examples where left ventricular cardiac mass is variably increased8,9 (42-376% within ±2 months). Melleby et al.7 reported that survival rates vary substantially (not solely due to surgical skills) ranging from anywhere between 25% to 75% of the cohort. One may also take into account the background strain of the animals used as Barrick et al. has shown strain to affect the severity of the outcomes10.

When TAC is applied on the aortic arch between the innominate artery and left common carotid artery, the constriction causes an increase in blood flow velocity/pressure through the stenosis while the blood flowing into the left common carotid artery is significantly decreased. The extent to which the flow is decreased is proportional to the severity of the stenosis. Conversely, the blood flow into the innominate artery, and therefore the right common carotid artery, increases as seen  by an increase in flow velocity. In the rodent model, assessing left common carotid, right common carotid and stenotic jet flow velocities can provide critical information about the success of the TAC procedure and help stratify animals within a research project. Using invasive pressure or flow measurements are, for obvious reasons, not feasible given the need to recover the animals for long-term monitoring. Thus, finding a user-friendly, reliable and repeatable non-invasive technique is of utmost importance for those employing the TAC model in their research.

Non-invasive techniques do exist to measure changes in flow velocity through the left and right carotid arteries. These options are based on the Pulsed Doppler Ultrasound approach using systems like a conventional ultrasound machine or the Indus Instruments Doppler Flow Velocity System (DFVS). With Doppler based techniques, the stenotic jet flow velocity can be reliably measured at the site of constriction as well as peak flow velocities of the left and right common carotid arteries. Utilizing this approach allows for the assessment of blood flow velocity in an animal immediately after application of TAC or any time post-surgery. (To see this being done click here) The ultimate goal is to compare the ratio between the peak flow velocities of the left and right carotid arteries as a means to stratify animals based on tight or loose bands. It may be important to ensure that all mice in a particular study experience the same degree of aortic constriction. The effects of an intervention may vary depending on the tightness of the band and resulting disease progression, making stratification of animals important to increase the power of the data.

When performing any blood flow velocity measurement, whether at the site of constriction or in the carotid arteries, one must always consider the angle between the ultrasound probe and the blood flow – the probe should be as in-line with the blood flow as possible to reduce this angle. Knowing the angle of measurement in relation to the flow direction is of great importance as this will affect the reproducibility and error within the flow velocity calculation. The greater the angle between the probe and blood flow the greater a measurement error that may be introduced into the velocity calculation (see the equation and graph below). With the small, single element, probes of the DFVS from Indus Instruments, angles of less than 15° can easily be achieved for both the aortic constriction and carotid artery measurements. 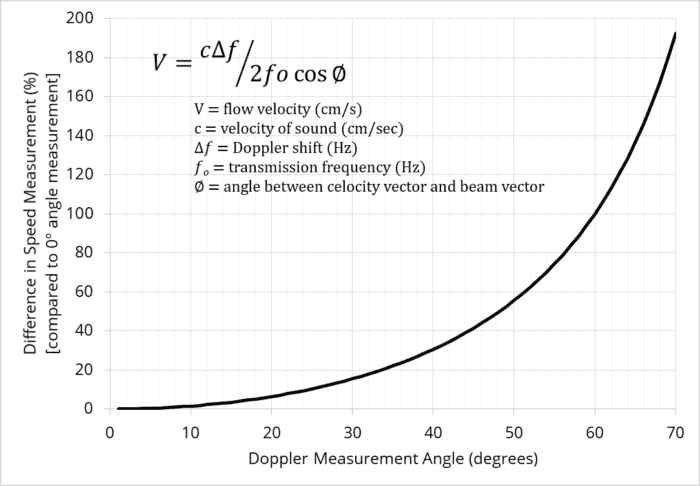 In addition to looking at flow velocity measurements in the carotid arteries and at the site of constriction, Doppler ultrasound-based measurements can be used to assess both systolic and diastolic cardiac function. These functional measurements can be used to monitor disease progression and confirm the onset of heart failure, differentiating it from the compensatory mechanisms of cardiac hypertrophy where the left ventricle tends to maintain functional outputs. Further, Hartley et al.11 found progressive worsening of coronary flow reserve (CFR) in TAC mice, which may also be assessed using Doppler-based measurements. This will help with further characterizing the disease model and progression, better linking observation on functional and molecular level.

Overall TAC is a very useful tool to model and investigate heart failure. It can be used to model disease progression and to study the efficacy of targeted treatments. Having tools and techniques to help understand the morphological changes on both the macro (size) and micro (cellular) scale of the heart, along with the adaptive changes to cardiac function, is crucial to furthering the understanding of this very complicated disease and to link them with concomitant/preceded (mal)adaptive changes on a molecular level.

A great visual resource for those interested in the TAC minimal invasive surgery and Doppler-based technique to assess carotid artery blood flow velocities is available from JOVE. There are examples of both open and closed-chest TAC survival procedures. Following is one such example6: https://www.jove.com/video/57397/a-closed-chest-model-to-induce-transverse-aortic-constriction-in-mice