Dual Energy X-Ray Absorptiometry How Does it Work?

Dual Energy X-Ray Absorptiometry (DXA/DEXA) is a technique used to assess body composition, providing measurements of bone mineral density and content
along with lean and fat mass measurements. In essence, each pixel on the x-ray image is assigned to one of three categories – bone, fat, or lean mass.

DXA is considered the standard of care for diagnosing and following osteoporosis clinically, while the World Health Organization (WHO) considers it the gold standard in measuring bone mineral density, providing the most accurate results. Measurements are considered to be very precise and stable over time, and can allow for evaluation of structural, bone density, and body composition changes over time. Clinically, changes seen on traditional x-ray represent advanced disease which likely will not respond to treatment; changes can be observed much earlier using DXA, when interventions may be effective.

In small animal preclinical research, body composition and bone mineral density measurements are relevant in many areas of research including:

These measurements can be used to assess the progression or regression of disease in response to a therapeutic regime or exposure to a compound of interest.

What Images and Data can be Generated Using a DXA System?

As will be described in more detail in the following section dual energy x-ray absorptiometry is the result of two x-ray images which are taken, one using low energy and one using high energy x-ray beams. These images are inherently co-registered as the animal is anesthetized so it does not move. The attenuation of the x-ray beams is measured at both energy levels and algorithms are used to determine which of the 3- compartment system each pixel falls into – fat mass, lean mass, or bone mineral content.

How Does DXA Work

Fundamentally, DXA takes advantage of the attenuation of the x-ray photons as they pass through the tissues of the body; specifically, that the extent of attenuation varies with the energy of the photons and the density and thickness of the material they are passing through.

For x-rays having the same energy this attenuation can be described using the following equation: 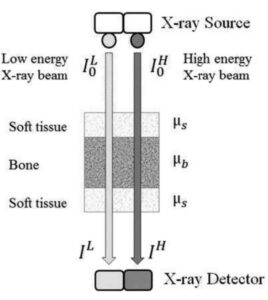 The acquired images are inherently co-registered as the animal does not move between the acquisitions. Initially, equations are used to determine if a pixel is to
be classified as either bone mineral or soft tissue. Bone mineral is a physically dense material made up of phosphorus and calcium, having relatively high atomic numbers, causing significant attenuation of the x-ray beams. Soft tissue is a mixture of muscle, fat, skin, and water; having lower physical density and made up of materials such as hydrogen, carbon, and oxygen having lower atomic numbers, therefore causing lower attenuation of the x-ray beams.

At the same energy, soft tissue and bone will have very different mass attenuation coefficients, and the equation becomes:

Where B is for bone and S is for soft tissue.

When DXA is performed then, using two different x-ray energies, the mass attenuation coefficient will be different, leading to two equations:

Ultimately the goal is to determine which pixels are considered bone mineral and which are soft tissue. The Area Density of Bone (MB) can be found using the following equation:

The ratio of k is derived from the image by measuring the transmitted intensity of the beam at points where there is no beam, in this case MB will equal 0. Once the ratio of k is determined then the equation can be solved for MB.

As the equations above presume a two-compartment system, that is bone mineral or soft tissue, any pixel not considered in the bone area measurement is then considered soft tissue. The same set of equations can be used on the soft tissue pixels to determine if the attenuation is a result of lean or fat mass. As soft tissue is inevitably a combination of molecules that make up both lean and fat tissues, each system must be calibrated to appropriate references to ensure appropriate assignment of soft tissue as either lean or fat mass. The values used depend on the lipid and non-lipid biological references used, as well as the energies of the x rays generated by the system to create the images.

As the images generated are two dimensional, and the systems have no way to assess the thickness of the tissue through which the x-rays passed, each pixel can only represent one of the three tissue types in the three-compartment system – bone, fat or lean mass. It is important to understand then that soft tissue located overtop of bone cannot be differentiated, nor can a thick diffuse bone be compared to thin dense bones. Likewise, visceral and subcutaneous adipose tissue located on the trunk which overlay one another cannot be differentiated; however, when located laterally subcutaneous fat will appear within its own pixel and can be differentiated from visceral fat.

The iNSiGHT system is a fully shielded X-ray cabinet which was specifically designed for preclinical small animal DXA applications, primarily using mice, rats, and similarly sized animals (10 ~ 500g). Measurements of body composition are taken quickly (~25 seconds), are non-invasive, and use very low-dose radiation; combined this makes the iNSiGHT system ideal for following the same animal over the course of a longitudinal study.

Measurements are made, using dual energy x-rays, to allow each pixel to be assigned to a 3-compartment model – that is either fat mass, non-bone/lean mass, or bone mineral content. DXA does not require any pre-treatment of the animal, contrast, or substrate injection, to acquire the data. It is also non-destructive and provides highly accurate and reproducible measures. The measurements provided by the iNSiGHT system include the following, and can be made on the 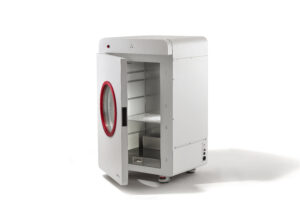 whole animal or up to 7 regions of interest:• Bone mineral density (BMD) in g/cm2

The quantitative results may be tracked over time on the same animal, and/or exported into a comma separated value format for data compilation and comparison.

To find out more about the iNSiGHT Preclinical DXA system for in vivo body composition and bone mineral density measurements please click here or feel free to reach out to us via email at info@scintica.com or by phone at 832-548-0895 and we would be glad to assist you

• The Four Ws of Preclinical Small Animal Imaging; What, When, Where & Why

• Dual Energy X-Ray Absorptiometry How does it work? 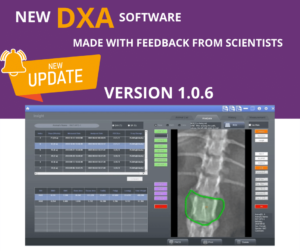 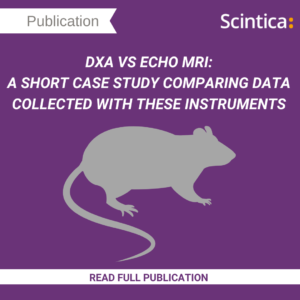