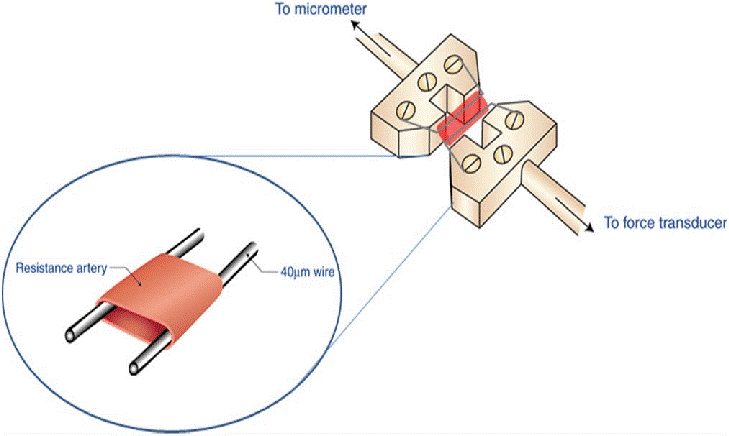 Vascular function can be assessed in vitro using a myograph. Benchtop wire myograph systems consist of an organ bath, mounting wire or prongs, a micrometer, and a force transducer and amplifier to measure tension development in the tissue. This simple set-up is used in many fields of research, including pharmacology and vascular physiology. In this article, we will explore a few different applications for wire myography as well as some features to consider when exploring options for myograph instrumentation.

For those unfamiliar with vascular reactivity studies using a myograph, let’s discuss the basics of the protocol.  A segment of the vessel of interest is dissected from an animal and placed into a dish containing a buffer solution to maintain tissue viability. Often, Krebs-Henseleit solution is used. Very carefully, using tissue forceps and scissors, tissue that has adhered to the vessel is removed. This must be done with great care to avoid damaging the vessel and impairing reactivity. Next, small sections of vessel are cut, and the wire or metal prongs are fed through the vessel and the apparatus is submerged in a bath chamber containing oxygenated buffer. The wire or metal prongs are then connected to a force transducer.  When the vessel contracts or dilates, the force exerted on the wire or prongs provides a measure of reactivity.

The myograph is often used to assess endothelial dysfunction. One example is a study by Haj-Yehida and colleagues 1. The authors investigated the effects of a stable superoxide dismutase (SOD) mimic compound on endothelial dysfunction in diabetic rats.  Following diabetes induction and administration of the SOD mimic compound for eight weeks, a small section of the thoracic aorta was dissected from the animal 1. Following preparation in Krebs-Henseleit solution, a 3 mm section was mounted to stainless steel wires and submerged in the bath chamber containing buffer 1.  For wire myograph experiments, it is essential to use an oxygenated buffer, that contains electrolytes and glucose, heated to a physiological temperature to ensure tissue survival.  The tissue must also be equilibrated at a resting tension with regular buffer changes prior to initiating a vascular reactivity protocol.  In this study, phenylephrine was used to stimulate vasoconstriction and acetylcholine and nitroglycerin were used to stimulate vasorelaxation when added to the tissue bath 1. The response was used to generate a concentration-response curve for the sample, which revealed reduced effects of vasodilators in the diabetic compared to control animals.

Many wire myograph systems can be configured with wire or metal prong vessel mounts that enable the study of many different vessels. Depending on the configuration of the mount, small vessels from rodents as well as smaller vessels from large animals like pigs can be studied using a myograph.

Peripheral vascular research is also a suitable application for the myograph. Puzserova et al. examined the effects of vascular aging on endothelial function if femoral arteries of normal and hypertensive rats 3. Femoral arteries were dissected from spontaneously hypertensive rats and Wistar Kyoto rats and mounted on a wire myograph system. Tissues were submerged in a bath containing a modified physiological salt solution oxygenated with 95% O2 and 5% CO2.  Following normalization, arteries were precontracted with serotonin. Once steady-state contraction was reached, acetylcholine was introduced as a vasodilator to generate endothelium-dependent concentration-response curves. The authors also sought to determine the role of nitric oxide and administered NG-nitro-L-arginine methyl ester (L-NAME) to the bath prior to repeating the acetylcholine concentration-response curve.

Given these few examples, it is clear the wire myograph system enables countless physiological and pharmacological experiments. This versatile instrument is suitable for use with vessels ranging in size from small peripheral arteries to large vessels such as the aorta. There are some features to consider when exploring myograph instruments for your research:

The wire myograph is a valuable tool for vascular researchers. I encourage you to explore the literature to learn more about the numerous applications for this instrument and contact us if you would like to discuss how to incorporate this technique into your research.