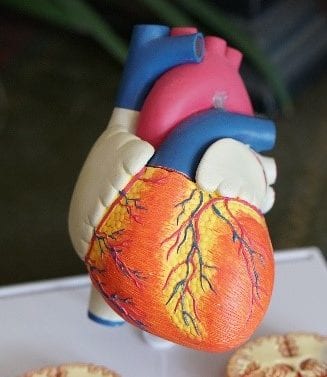 Coronary flow reserve (CFR) is a measure of the ability of the coronary arteries to increase blood flow to the myocardium via dilation during periods of stress.  CFR is reduced by age, as well as various disease states including coronary artery disease.  Given the small size and significant branching of these arteries, traditional methods for assessing coronary flow are highly technical and invasive, such as invasive flow probes and coronary catheters.  Echocardiography may also be employed, however this is a costly solution.

Isoflurane is a commonly used anesthetic agent and is also a potent vasodilator.  When coupled with non-invasive Doppler flow velocity technology, it can be used to assess CFR in rodent models.  Hartley and colleagues provide an excellent example of this method1. In this study, CFR was compared in young C57BL6 wild-type, old ApoE+/+ wild-type, and old ApoE-/- knockout mice using the Indus Instruments Doppler flow velocity system. Animals were anesthetized, and a 2 mm diameter 20 MHz Doppler probe was placed on the left side of the chest, at the level of the cardiac base. It was pointed horizontally toward the basal surface of the heart to identify coronary flow signals on the Doppler spectral display. Once identified, the probe was fixed in place using a micromanipulator, resulting in a sound beam near parallel to the axis of the left main coronary artery.  Unlike echocardiography probes, the Doppler probes can be oriented at a very acute angle relative to the direction of blood flow, resulting in less error and no need for angle-correction. (To learn more about measurement error related to probe angle, see the following document).

To determine CFR, isoflurane was lowered to 1% to obtain baseline flow. 3-5 minutes later, isoflurane was increased to 2.5% and additional signals were obtained. Isoflurane was again reduced to 1% to stabilize A ratio of hyperemic to baseline coronary flow (H/B) was obtained as the ratio of peak diastolic velocity at the highest level of isoflurane compared to that at the lowest level of isoflurane.  The hyperemic to baseline ratio was significantly different between old mice and young mice, and between ApoE-/- mice and age-matched controls. These findings provide evidence of an effective, non-invasive method for assessing CFR in mice.  The authors also highlight the importance of considering the anesthetic agent and dose when assessing coronary flow in mice, given its potent and rapid effect on vasodilation.

The study by Hartley and colleagues provides evidence that non-invasive Doppler technology can be used to accurately assess CFR in mice1.  In a later study, Chintalgattu and colleagues used this technology to examine the mechanism of cardiotoxicity of anticancer platelet-derived growth factor receptor (PDGFR) inhibitors2. Platelet-derived growth factors (PDGF) isoforms exert their proangiogenic effects through interaction with class III receptor tyrosine kinases, PDGFRα and PDGFRβ. Binding induces angiogenesis, in part, via upregulation of vascular endothelial growth factor (VEGF) production.  These receptors are also expressed on malignancies and are targeted by receptor tyrosine kinase (RTK) inhibitors including sunitinib, sorafenib, and imatinib. Unfortunately, myocardial dysfunction, damage and heart failure have been reported among patients treated with these agents.  In this study, researchers sought to examine the role of PDGFR signaling in the heart in hopes of providing insight into the mechanism of cardiotoxicity of anticancer PDGFR inhibitors. They hypothesized that PDGFR signaling may play a role in the cardiac response to vascular stress such as hypertension.

Hyperemic coronary flow in PdgfrbMerCre mice was reduced at baseline and following pressure overload (TAC). The minute augmentation in response to the isoflurane vasodilatory stimulus indicated impaired coronary microvasculature in this group. Taken together, results of this study suggest a potential mechanism by which anticancer PDGFR inhibiting agents may contribute to cardiotoxicity. Specifically, the response to load-induced stress is mediated, in part, by PDGFR-β signaling stimulating angiogenesis.

This very small sample of just two studies demonstrate the simplicity of non-invasive Doppler blood flow determination of coronary flow reserve. Chintalgattu et al. provide insight into the effects of anticancer agents on the coronary microvasculature, however there are a myriad of other disease states and therapies that can be assessed using CFR.  Non-invasive assessment of coronary flow velocity with the Doppler flow velocity system is an excellent alternative to invasive flow probe and catheter procedures and provides accurate results.