Cardiac Capacity and Thermal Performance: an examination of cardiovascular development in Atlantic salmon 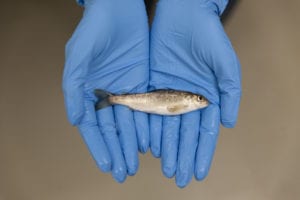 This team of researchers in the Biology Department at Western University are investigating ways to reintroduce Atlantic salmon to the Great Lakes, specifically Lake Ontario.

Hatchery stocking programs are a major tool used to improve recreational fishing opportunities. They are also often used to help supplement at-risk populations of fish in vulnerable habitats. One of the challenges related to these projects is ensuring these hatchery fish survive after release into natural habitats. This challenge is further complicated by increasing water temperatures, which can cause a disconnect between the thermal performance of hatchery populations and the environments they are released into. The ability of these fish to succeed in warmer environments depends largely on their cardiorespiratory capacity, especially heart function1. Work done by the Neff lab in the Biology Department at Western University shows that cardiac physiology in salmon may be influenced by both genetic and environmental factors, such as rearing temperature2,3.

One particular project, led by PhD student Carlie Muir, examines cardiovascular development of Atlantic salmon at elevated rearing temperatures, and how this affects their cardiac capacity and thermal performance later in life. In anesthetized fish, maximum heart rate and atrioventricular blood (AV) flow velocity was measured at increasing temperatures using the Doppler Flow Velocity System from Indus Instruments. The Doppler Flow Velocity System provides non-invasive measures of blood velocities through the AV valve in the heart of these anesthetized juvenile fish, allowing longitudinal studies throughout their development. This is the first time this system has been used in salmonids. This study found that higher temperatures during development led to higher optimal temperatures, as calculated by both heart rate and cardiac output.  Higher temperatures during development were also associated with the ability to maintain normal cardiac function at higher temperatures, without experiencing cardiac arrhythmias. These results support the team’s hypothesis that the thermal environment experienced during development can alter thermal performance later in life, possibly through plasticity in cardiac development. 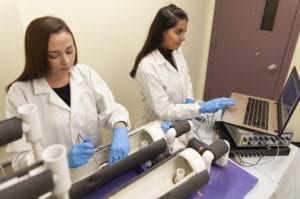 This thermal performance data will be used to identify best practices for hatchery rearing and stream releases in Lake Ontario tributaries. In addition, these findings contribute to our understanding of how wild salmonid populations may respond to projected increases in water temperature.

• Aging and the Cardiovascular System; An in vivo and in vitro approach to the pre-clinical assessment of arterial stiffness

• A Tale of Two Tubes: Exploring the Causes of Cardiovascular Disease from the Arteries to the Gut

• Endothelial Dysfunction and Arterial Stiffness: Elucidating the mechanisms of the underlying pathophysiological changes

* Transverse Aortic Constriction (TAC): Why, how and the outcome as it relates to pressure overload-induced cardiac hypertrophy and/or heart failure