In this webinar Dr. Lakshmi Santhanam an Associate Professor of Anesthesiology and Critical Care Medicine and Biomedical Engineering at the Johns Hopkins University School of Medicine discussed her most recent work in vascular aging. Dr. Santhanam uses a catalytically inactive knock-in mouse model to look at the effects of vascular aging by measuring Pulse Wave Velocity.

Introduction: Aging-associated vascular stiffening augments cardiovascular disease risk in the elderly.  Research to identify targetable cellular and molecular mechanisms is of key interest as no current therapies are available to specifically target vascular stiffening. In this context, enzymes that mediate remodeling of the vascular matrix and those that promote cellular dysfunction are attractive targets. In pre-clinical models, pulse wave velocity (PWV), the gold standard measure of in vivo vascular stiffness, can be measured longitudinally and non-invasively, to make inroads towards the discovery and validation of potential targets.

A novel target and model: We have identified a central role for tissue transglutaminase (TG2) in vascular stiffening during aging.  TG2 is a multifunctional protein of the transglutaminase family, whose primary function is to assist in the formation of a strong and stable matrix by catalyzing crosslinking of matrix proteins. Recent studies have shown that TG2 has putative crosslinking-independent functions in aging-associated vascular stiffening and dysfunction. The crosslinking independent mechanisms of TG2 remain incompletely understood due to the lack of pre-clinical models and specific inhibitors that can selectively inhibit a single function of TG2. Thus, we developed a novel knock-in mouse, the TGM2-C277S mouse, by mutating the active site cysteine of TG2 using the CRISPR-Cas9 gene editing technology to selectively target its crosslinking function.

The learning objectives are: 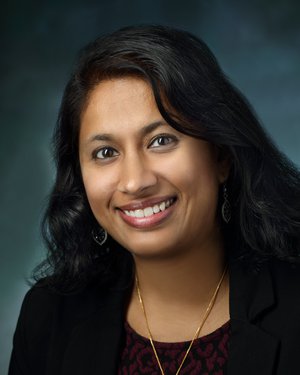 
Dr. Lakshmi Santhanam is an associate professor of Anesthesiology and Critical Care Medicine and Biomedical Engineering at the Johns Hopkins University School of Medicine.

Her research focuses on fundamental mechanisms of cardiovascular disease. Her particular interest is to further understand the role of nitric oxide mediated S-nitrosylation (a post-translational modification of proteins) on protein function and trafficking in the vasculature and how this leads to matrix remodeling and vascular stiffening.

She earned her Ph.D. from Rensselaer Polytechnic Institute in New York.