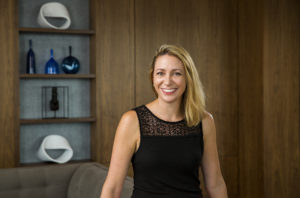 The recipient of our travel award that helps scientists further their research is Amanda Jo LeBlanc, Ph.D. – Associate Professor in Department of Physiology and the Cardiovascular Innovation Institute, University of Louisville

I began a career-long interest in the microcirculation when I joined the laboratory of Dr. Judy Muller-Delp, where I learned the isolated vessel preparation. I immediately developed an intense pride and appreciation for such a difficult technique. My graduate research at West Virginia University (WVU) focused on the structural and functional microvascular alterations that occur with advancing age in the heart and how females may differ in those regards.

After I completed my Ph.D., I combined my interest in the coronary microcirculation with the field of cardiovascular toxicology during my initial post-doctoral training at WVU, followed by a post-doctoral fellowship at the Cardiovascular Innovation Institute (CII) at the University of Louisville. It was at the CII that my interest in translational research in cardiac physiology blossomed, and I was able to learn various tissue-engineering techniques and improve my knowledge of overall cardiac physiology and function.

Since I transitioned to an Assistant Professor in January of 2012, my primary research area as an independent investigator include exploring sex differences related to regenerative medicine in the heart, particularly in an aging model. Epidemiological data indicate that sexual dimorphism exists in the chronological development of cardiovascular disease (CVD) risk. The risk for CVD begins to increase at approximately the same age that microvascular function has been shown to decline in men. Women also exhibit this correlation; however, it occurs more than a decade later as women experience cardioprotection until menopause, presumably due to estrogen. Furthermore, sex differences in the way myocardial infarctions present in patients warrant sex-specific cardiac therapies.

The ongoing  studies in the laboratory have allowed us to evaluate tissue-engineering therapies to regenerate a functional microcirculation in aged cardiac tissue, with a long-term goal of providing a microvascular therapy specifically for patients of advanced age.  My research has identified the impaired signaling mechanisms involved in depressed coronary blood flow reserve in aged males and females. We are actively exploring how our cell therapy targets reactive oxygen species signaling to exert improvements in flow-induced vasoreactivity.