Aging sharply increases the risk of cardiovascular disease, the leading cause of death in the United States. Even in individuals without overt cardiovascular disease, aging is associated with increased prevalence of cardiac hypertrophy, impaired diastolic function and reduced myocardial performance. Diastolic dysfunction is a common contributor to heart failure with preserved ejection fraction (HFpEF), which is highly prevalent in the elderly and has no effective treatment. Impaired diastolic function also results in exercise intolerance and in turns contributes to frailty, which is a significant medical and social challenge. Therefore, novel strategies to improve diastolic function in the elderly are urgently needed.

Mitochondrial dysfunction is a hallmark of aging. The heart carries a high energetic demand and the concept that impaired cardiac function is associated with impaired mitochondrial efficiency is well established. However, an important question remains as to whether improving mitochondrial function at late-life can rescue pre-existing age-related cardiac dysfunction. SS-31 peptide, also known as elamipretide, is a mitochondrial targeted peptide that has been shown to reduce mitochondrial oxidative stress and to interact with cardiolipin to modulate cytochrome c function. We recently showed that 8-week SS-31 treatment at late-life can reverse pre-existing diastolic dysfunction in old mice. SS-31 treatment enhances mitochondrial function and normalizes age-related molecular and cellular changes in old murine hearts. Similarly, scavenging mitochondrial reactive oxygen species (ROS) by AAV-mediated mitochondrial-targeted expression of catalase (mCAT) also improves diastolic function in old mice.

Deregulated nutrient sensing is another hallmark of aging. The mechanistic target of rapamycin (mTOR) integrates nutrients and other signals to regulate cell growth and metabolism, and deregulated mTOR signaling has been implicated as a major driver of aging. We have demonstrated that late-life inhibition of mTOR signaling, by caloric restriction (CR) or rapamycin treatment, improves diastolic function and attenuates cardiac hypertrophy in old mice. We discovered that these cardiac benefits are accompanied by proteomic and metabolic remodeling in the heart. Interestingly, rapamycin also induces transient mitochondrial remodeling to improve cardiac mitochondrial metabolism.

Together, these observations support the potentials of interventions targeting hallmarks of aging as therapies for age-related cardiac dysfunction and the concomitant negative physiological consequences in the elderly.

Slide Deck
On Demand
Q & A 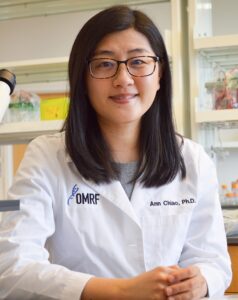 After obtaining her B.S. and M.Phil. degrees in molecular biotechnology at the Chinese University of Hong Kong, Dr. Chiao completed her Ph.D. in biochemistry at University of Texas Health Science Center at San Antonio in 2011. She is currently an Assistant Member in Aging and Metabolism Research Program at Oklahoma Medical Research Foundation. The overall objective of her research program is to understand how cellular and molecular changes during aging negatively impact cardiac function, and to develop interventions to improve cardiac function in the elderly. Her lab is specifically focused on diastolic dysfunction, which is a hallmark of cardiac aging and a key contributor for heart failure with preserved ejection fraction (HFpEF), as there is presently no effective treatment for diastolic dysfunction or HFpEF. She is currently studying how targeting mitochondrial dysfunction and deregulated nutrient sensing, two hallmarks of aging, can reverse age-related cardiac dysfunction.