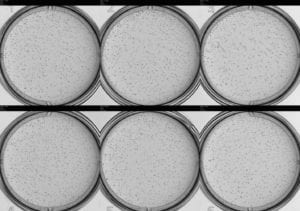 A typical manual counting scenario looks like this: The researcher finds an object and decides whether it is a colony. If it is determined to be a colony, the researcher then ascertains if it meets a minimum threshold to be a colony. If it does then 1 is added to the running total and the researcher moves on to the next object. This move needs to be methodical as not to risk recounting previously counted objects and the process is repeated for all objects across every well and plate.

Manual counting is a thank-less and highly labour-intensive process. As those who do it know it is not uncommon for a total count of a hundred plates to span a full 8-hour working day. Some assays may even require the analysis of thousands of plates which effectively subjects a capable researcher to a menial task for a 1, 2 or even 3-week period. For a researcher to have the necessary skills to count colonies they must be adequately trained which is another expensive and time-consuming process. On top of the time, money and effort invested into manual counts the results may possibly be non-repeatable and are often fraught with errors.

Visually counting colonies presents several key problems for researchers. First, it is often difficult to determine the acceptable size. If a colony is on the borderline is it counted or not? Is there potential in a set of particularly small colonies that a larger colony that is under the value will be counted? Adversely, in a large colony sample is a smaller colony over the size limit counted?  In practice, “this means that an error of only ±10% in the visual estimate of colony size can result in +90% to –45% counting error”.1 Since size can often be difficult to determine accurately, this issue can contribute to large errors when counting colonies.

Further, with three-dimensional clonogenic assays becoming the standard, as they are better predictors within in vivo environments, manual counting has become an even more tedious task. One problem with manual counts in these assays is the count analysis is confined to the flat portion of the agar surface, as the meniscus near petri dish walls can cause optical distortion. In the distorted area, countless colonies may be missed or are partially obstructed making the decision on whether to count these colonies a nearly impossible task.

Another issue with counting three-dimensional assays is the counting almost always needs to be done using a microscope to aid in detection. Unlike monolayer assays, which allow colonies to spread out, 3-D assays form spheres that normally can not be counted with the naked eye. Not only must the researcher scan the X and Y axis under a microscope and make sure they do not recount already counted colonies, they must also adjust the Z axis to make sure they count colonies at any depth. Once one includes the Z axis it can be particularly difficult keeping track of where one is within any plate, and thus a researcher must be highly trained and experienced to be precise in their counts.

Last, manual counting has the issue of “the human factor”, which is to say humans are far from perfect especially when it comes to long tedious tasks.  More simply, basic human error plus the large physical and mental fatigue from repetitively counting over a microscope can seriously affect the accuracy and reproducibility of results, particularly on a large count. Studies have shown that this “human error” from investigative fatigue is such a serious problem that “errors of 100% or more have been observed when two people count the same plate.”1 Further, manual counts can be compromised, either wittingly or unwittingly, by the bias of a researcher whose expectations about the outcome of the experiment impact their counts.

Any individual running a lab that performs manual colony counts, even on a semi-regular basis, should be asking themselves at this point – Is the huge time, effort and cost of manual counting worth the trouble and is there a way to streamline this counting process, accelerate research and reduce costs?

A typical automated counting scenario looks like this: A researcher places 4 multi-well plates (also options for petri dishes and T-25 flasks) into a hardware component which images the colonies. The operator will set the imaging preference and they can focus on other tasks while imaging takes place. Once images are acquired, the researcher needs to then set the correct counting parameters (size setting, delineating colonies from artifacts, etc.) for their experiment within the software for a single well. These settings are saved and then every well across an entire experiment can be counted and analyzed using these same settings. This will take a few seconds per well. At the end of this quick counting process, all data from each well can be exported to excel to be further analyzed from there.

Cancer biologists processing tumor colony-forming assays will see significant benefits when they automate detection, counting and analysis of mammalian cell colonies. There are many advantages with the most obvious being the increase in accuracy and speed of counts.

Machine counting offers completely objective and consistent counting, all while being much faster than the manual counting method. While a large manually counted assay (of 100 plates) might take 8+ hours, an automated system could shave off 6-7 of those hours, for most of which the researcher could be doing other tasks while the plates are being imaged. Also, unlike a single researcher counting colonies for hours, an automated counter will not suffer from issues like fatigue, bias or subjectivity. Further, since a microscope is not needed in automated counting, the issues regarding the meniscus or having to orient a microscope across the X, Y and Z axis are eliminated, increasing the count accuracy.

The automated image acquisition and analysis approach to colony counting has been validated and found to provide higher accuracy, reproducibility, and precision of results. When looking at variation in counts, manual counting “has been shown to have a significant degree of intra- and inter-observer variability, with coefficients of variation (CV) ranging from 8.1 to 40.0% and 22.7 to 80%, respectively. Standard CVs for cell viability assessment and progenitor (colony) type enumeration have been shown to range from 19.4 to 42.9% and 46.6 to 100%, respectively.”2 Since automated colony counters use the same settings within an experiment, the variability across all counts will be essentially 0 which effectively remove the “human factor”.

While there is nothing wrong with just having colony counts, technological advancements have made it possible to incorporate extensive analysis parameters into automated colony counters. This provides researchers new insights and the opportunity to capture and report additional qualitative and quantitative data. Beyond attaining just count statistics researchers can also generate detailed colony size information.  This capability to measure the effects of therapeutic regimes on absolute colony numbers and colony size, makes it possible for researchers to increase the sensitivity of the colony forming assay by acquiring information involving colony growth dynamics.

Another major advantage of automated technology is that three-dimensional cultures can be imaged repeatedly without cell staining which often stops growth or damages colonies. This makes it possible for true growth curves and time-dependent effects to be quantified using colony number and colony size. Not only do automated systems afford researchers more information in the way of growth dynamics but they allow for informative comparisons that could not be quantified through manual counts alone.

While there is certainly an initial cost to set up any automated system, this investment is almost certainly less than the time and actual cost to have researchers do this menial but important task over the course of a few studies. These systems are often be used by several groups by placing the hardware (imaging) component in a central (core) area and placing the analysis software on all researchers computers. This means once images are obtained, the hardware component is free for the next user and the researcher can analyze colonies at their convenience. When the time needed to properly train researchers and do colony counts is accounted for, both the short- and long-term investment in an automated system seems to be one that is a net positive for labs and research teams.

Today’s imaging systems for automated colony counting deliver data capture and export capabilities that are just not possible with manual counts. The ability to capture, process and export data on or offline gives researchers a cost effective and quick method of undertaking objective and rigorous studies and extends the ability of researchers to participate in global or large-scale trials. Automation also provides researchers data archiving and retrieval capabilities. For example, colony counts and statistics can be automatically exported to an Excel spreadsheet, while sample images can be stored in a generic bitmap format for printing, presentations and publication purposes.

Compared to manual counting, automated colony counters provide substantial performance enhancements including faster processing and throughput, improved accuracy and additional information – all of which improve research outputs without wasting valuable time or compromising data quality. The automated counting method opens the door for more researchers to apply improved preclinical methodologies to study the effect of multiple drugs or other therapeutic treatments on cancers. With its impressive throughput, automated colony counting allows for highly ambitious projects that will advance the frontiers of cancer research.